Dalmatia is a boating heaven. Whether setting sail from one of the D-Marin marinas, nestled along the coast between Zadar and Šibenik, on a megayacht, yacht or sailboat, or simply being eager for adventure, the most stunningly beautiful islands are located in Central Dalmatia. The most popular islands are Hvar and Vis – the two must-visit oases of blueness in the Adriatic Sea. 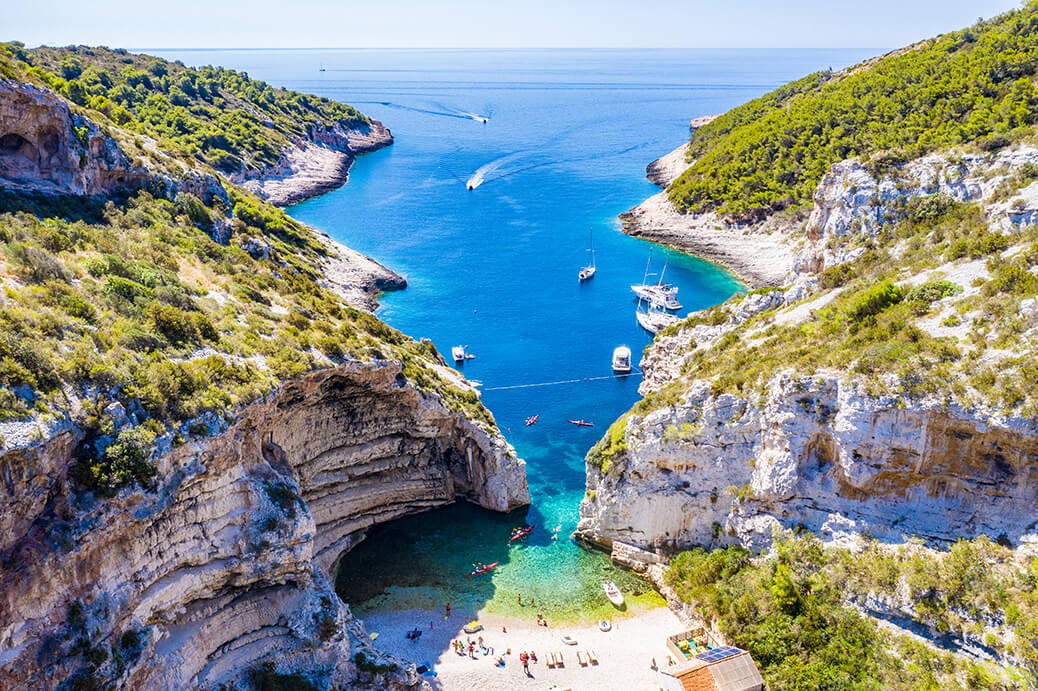 Vis is also known as the island of happiness and unspoilt nature, and should definitely be included in your list of must-see places if you are sailing in the southern Adriatic Sea. Its coves are known the world over, which is why the island has become an exceedingly popular boating destination over the past few years. As for its natural attractions, we should definitely mention Stiniva, which was named the most beautiful European beach in 2016. It is easily recognizable because of the narrow and long bay ending in rock formations forming an entrance into a pebble beach surrounded by cliffs. Other stunning Vis beaches include Grandovac, Srebrena, Zaglav, Tepluš and Pritišćina, as well as a number of tiny coves and bays with crystal clear sea that you simply have to drop anchor in.

Vis is also one of the islands known for its top-quality culinary tradition, mostly focused on fish dishes – there is no way you will leave the island hungry. Every konoba or tavern and family-owned farm on the island serves the traditional viška and komiška pogača, pies made from yeast dough and salted sardines or anchovies, together with a filling made from tomatoes, onions, and fresh herbs. To be able to fully enjoy their taste, make sure you pair them with Vugava, the most popular white wine variety cultivated on the island, or Plavac, if you prefer red wine. Lastly, you should not leave the island without some viški hib, a treat prepared with figs, fennel, almond, orange zest and travarica (a type of brandy infused with local aromatic herbs), and preserved wrapped into rosemary or bay leaves, which protect the treat from flies and other insects, and provide an additional, subtle flavor.

Following your Vis adventure, you can sail toward one of the islands in the open sea, including Biševo, where you can visit the famous Blue Grotto, Svetac, Brusnik, Palagruža and Jabuka, the farthest Croatian island.

Our sunniest island is recognizable for its violet fields of lavender. Here, you will enjoy fragrances wafting across the entire island, as well as flavors, because wherever you may turn on Hvar, you will chance upon top quality restaurants, konobas, and family-owned farms. Make sure the gregada finds its way onto your plate; it is a traditional fishermen’s dish that the island is known for throughout the Central Adriatic. Hvar’s culinary heritage also includes grabljanska pašticada; panada, a dish made of old bread soaked in water, seasoned with olive oil and salt, with boiled rice and tomato sauce; and pećica na tećicu, a dessert made of fresh goat cheese with sugar or honey.

Of course, the island of Hvar is chock full of pebble and sandy beaches, where you can drop anchor and indulge in summer relaxation in the Lozna, Pelinovik, Vela Stiniva, Tatinja, Pokrivenik or Jagodna coves. Should you desire solitude, you will find it in the Zavala, Mala Stiniva and Prapatna coves, which are harder to access from land, so you will barely see a boat there. Many coves hide beautiful beaches, such as the Dubovica Beach near the town of Hvar. Some four kilometers away, on the southern side of the island, lies the town of Milna in a protected cove with four pebble beaches. Then, there is the settlement of Zaraće and its two deep bays with pebble shores. Lastly, on the northern side of the island, you will find the Mala and Vela Stiniva coves.

Since you are already on the island of Hvar, set sail to the Pakleni Islands, a perfect choice for those wanting to take a swim, and located just across from the town of Hvar. These uninhabited islands have beaches and coves you will fall in love with at first sight. The closest one is Jerolim with its nudist beach, followed by the island of Klement and its most famous beach, Palmižana, one of the most beautiful beaches in Croatia.